We know that Russia is investing heavily in new agricultural equipment and machinery at an incredible rate. We also know that there exists a huge deficit in machinery pools nationwide. The market is wide open to imported cutting-edge modern machinery.

For foreign manufacturers, YugAgro provides a platform to get their products and solutions into the hands of Russian farmers and agroholdings.

But what do they want and how much are they willing to spend? Read on to find out?


Agricultural machinery is a $1.2 billion import market in Russia


Read that figure again. There is $1.2bn in export potential waiting to be untapped in Russia’s crop farming machinery sector.

Russia is a lucrative export market for sure – but its buyers are still not purchasing enough for full fleet upgrades.

According to Alexander Tkachev, Russia requires at least 180,000 new tractors and 80,000 combines, on top of other pieces of essential equipment. That’s quite the deficit.

It’s not surprising either, when you look at shrinkage in pool and fleet sizes. Across the last decade, Russian reserves of agricultural machinery have essentially halved overall. Check out the alarming drop offs below:

Such a dramatic shift requires a dramatic response. Russian farmers simply need to start investing in modern equipment if they are to keep up with the government’s hefty crop and vegetable protection targets.

Now we know what Russian crop farmers, let’s see where they can get it.


Russia sources its imported goods from a variety of locations. The US, for instance, contributes a healthy $79.8m in crop farming technology annually to Russia. China, one of Russia’s many neighbours, also exports a respectable $58m worth of such goods a year too.

Both are blitzed by Europe’s contribution.

Germany and Belarus lead the charge in spectacular fashion. Germany alone is responsible for nearly a quarter of total exports. Europe’s top equipment and machinery exporters look like this:

German brands are so well represented in Russia that market leaders, and YugAgro exhibitors, Claas has set up a production facility in Krasnodar.

Krasnodar is considered the heartland of Russian agriculture, harvesting huge quantities of produce every year.

YugAgro is often inundated with a propensity of brands from the above countries, often operating cross many different equipment segments. Check out the show’s exhibitor list to get an idea of who takes part.


If you think the market is only short term, think again. For the next decade at least, Russia will be tangling with the thorny issue of supplying its population with enough to eat. That heavy burden lies on the shoulders of crop companies, agroholdings, and private farmers.

It’s up to them to turn their homeland from a net agricultural importer to a world-beating exporter. Given the fact food imports, including fruits and vegetables, rose 11% in 2017 after three years of stagnation, self-sufficiency is still quite a way off.

It’s predicted Russia will now become self-reliant in food supplies by 2025 at the earliest. That’s 7 years into the future, and its farming operations will have to spend big until then.

The market for foreign agricultural machinery in Russia is stable and isn’t going anywhere any time soon.

Now you know that, it’s time to meet the buyers. You can do that at YugAgro 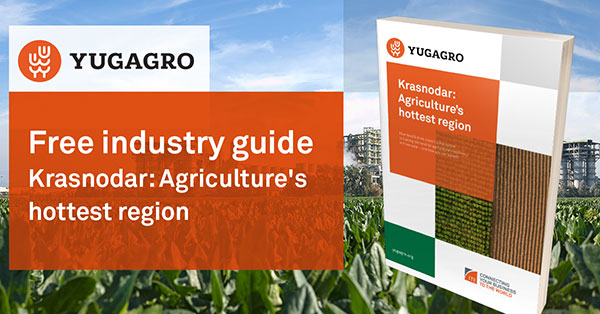