The YugAgro exhibition once again became a unique business platform of the country for the interaction of producers, suppliers and farmers from Russia and the CIS after an inevitable pause in 2020. The entire agro-industrial complex of Russia was presented at this pivotal exhibition: agricultural machinery, seeds, fertilizers, crop protection, equipment for storage, processing, irrigation, and greenhouses. After a long break in business activity, farmers, producers, and suppliers managed to meet and negotiate, discuss conditions, and coordinate supplies before the start of the new agricultural season. At the exhibition, visitors could see new products, make purchases for the next year and cover all their production needs. Major distributors also have shown a special interest in YugAgro 2021.

More than 640 companies from 25 countries took part in the trade show. More than 150 companies presented their products for the first time. Companies from Italy, Germany, and Turkey presented their respective national stands. The exhibition was visited by 14,381 farmers from 73 regions of Russia: from the Far East to the Republic of Crimea. Those were representatives of agricultural firms, agricultural complexes, and peasant farms, suppliers of agricultural machinery and spare parts, agrochemical products, and planting materials.

Rostselmash presented more than 10 agricultural machines and aggregates, including such novelties as RSM 3535 DT and RSM 1370 tractors with an articulated and classic frame, a RSM T500 two-drum combine harvester, as well as an array of agronomic services and digital solutions. The visitors could also see the already well-known and proven Rostselmash developments: RSM 161 and TORUM 785 grain harvesters, as well as a RSM F 2650 forage harvester.

Altair and CNH Industrial presented a new generation of high-performance tractors with integrated AFS Connect telematics system - Optum 300 CVX, Steiger 470 and Magnum 400 in wheel and track configuration Rowtrac. Vincent deLassagne, General Manager of CNH Industrial in the markets of Africa, the Middle East, and the CIS countries, noted: “I am proud of the opportunity to present with colleagues our new development — the Case IH Optum 300 CVX Drive AFS Connect tractor, whose world premiere and sales start in Russia. CNH Industrial will not stop there and will continue to develop the market in your country.” In total, the exhibitor presented 37 agricultural machines, 15 of which are novelties.

The AST team, the official dealer of John Deere, presented a line of tractors at the exhibition: John Deere 9rx640, John Deere 6140 B and John Deere 6210 М.

For the first time at the exhibition, the leading international company Kverneland Group CIS that is engaged in the development, production, and sale of agricultural implements, electronic solutions, and digital services, presented equipment of the Kubota, Kverneland, and Great Plains brands at one stand. The manufacturer held more than 500 business meetings with enterprises from different regions of Russia, as well as Rosagroleasing JSC. During the exhibition, the company's stand was visited by farmers from many agricultural regions of Russia, including not only the southern territories and central Russia, but also Ulyanovsk, Omsk, Novosibirsk regions, Krasnoyarsk territory, Tatarstan and Bashkiria, as well as the Far Eastern region.

Participation in YugAgro 2021 yielded outstanding results to Almaz Altai Machine Plants. According to the manufacturer, it was one of the most productive exhibitions for the company in several years. During YugAgro 2021, Almaz has sold all the presented equipment. In addition to the exhibited units, contracts were signed for the supply of more than 10 units of equipment. At YugAgro 2021, several stands presented another area of activity of Altai Machine Plants – the spare parts manufacture for agricultural machinery. Despite the small area occupied by these stands, the negotiations involved huge amounts: in total, contracts worth more than 2 billion rubles were signed for the supply of spare parts at the exhibition.

In the Agrochemical Products and Seeds sector, more than 210 companies presented selection novelties of the most popular crops, a huge range of fertilizers, including micro fertilizers and certified potash, nitrogen, phosphorus, and organic and liquid fertilizers. In addition, chemical and biological plant protection products and comprehensive programs, agrochemicals, preparations for the protection of gardens were demonstrated. The exhibitors were manufacturers and suppliers from Russia, Turkey, Italy, Belgium, Germany, Spain, China, Hungary, Belarus, the Netherlands, and Cyprus.

During the exhibition, over 1,000 representatives of agricultural enterprises from all over Russia visited the Corteva Agriscience stand and the conference on sustainable solutions in the field of agricultural production, organized by the company and dedicated to the 95th anniversary of the Pioneer brand. Negotiations were held with farms from the Southern, North Caucasian, Northwestern, Central, Volga, Ural, Siberian, and Far Eastern Federal Districts, as well as Kazakhstan. “Participation in the YugAgro exhibition is a unique opportunity for the company to meet with farmers of the country in a few days, not only to talk about new products, but also to get feedback and summarize the preliminary results of the outgoing agricultural season: how our products have proved themselves, and what we see further prospects in various segments of crop production,” Alexander Kozachkov, head of Corteva Agriscience business in Russia, shared his opinion.

The Shchelkovo Agrohim company prepared a large number of new products for its customers. The Soko company, a leading producer of soybean seeds, presented varieties adapted to various soil and climatic conditions. PhosAgro-Region and Agroplem signed a memorandum of cooperation in the field of soil fertility improvement. Novelties of plant protection products were presented by the Syngenta company. Nine of them are currently being registered and will be available to farmers by the beginning of the 2022 season. Bayer, an international concern specializing in biomedical solutions for healthcare and agriculture, will provide farmers with new technologies for herbicidal protection of grain and tilled crops by the beginning of fieldwork in 2022. Acron took part in the exhibition for the first time and presented a full range of mineral fertilizers.

ROSAGROTRADE, one of Russia's largest producers of seeds of domestic and imported selection, presented a wide range of seeds of corn, sunflower, sorghum, sugar beet, soybean, pea, barley, and wheat hybrids to the YugAgro visitors.

Voronezhselmash, a leading manufacturer of post-harvest processing equipment, showed both novelties, including a conveyor grain dryer and two types of separators, and the traditionally in-demand primary grain cleaning machine.

In the Irrigation & Greenhouse Equipment sector, the visitors could get acquainted with a wide range of solutions for greenhouses of any scale, irrigation equipment, and irrigation equipment. Over 90 companies from Russia, Azerbaijan, the Netherlands, Turkey, Greece, Serbia, and other countries exhibited in the sector.

Pegas-Agro welcomed visitors with an expanded exposition of equipment at two stands at once. This decision was made by the manufacturer of self-propelled sprayers due to the huge number of incoming requests.

The YugAgro Business Programme serves as a platform for an effective dialogue between agricultural producers, business, and government and unites key players in discussing the most acute and urgent issues of agricultural development. In total, more than 30 events with 80 speakers took place within the framework of the Business Programme’ 2021. 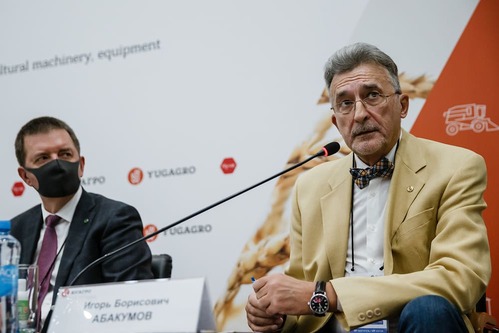 The plenary session on the topic “The business of technology: the role of technology in increasing the profitability of agricultural industries” launched the events of the YugAgro 2021 Business Programme. The speakers: Vladimir Beketov, member of the Federation Council of the Federal Assembly of the Russian Federation; Fedor Dereka, Minister of Agriculture and Processing Industry of Krasnodar territory; Alexander Trubilin, Deputy Chairman of the Legislative Assembly of Krasnodar Territory; Pavel Kosov, General Director of Rosagroleasing JSC; Dmitry Rylko, General Director of the Institute of Agricultural Market Conjuncture (IKAR). The event was moderated by Igor Abakumov, General Director of the Krestianskiye Vedomosti media group.

In his speech, Vladimir Beketov, member of the Federation Council of the Federal Assembly of the Russian Federation, highlighted that within the framework of the Russian Food Security Doctrine, the country's agro-industrial complex faced the task of achieving self-sufficiency in all major types of agricultural products, and exhibitions like YugAgro would contribute to this. Fedor Dereka, the Minister of Agriculture and Processing Industry of the Krasnodar Territory, said that currently Kuban produced 7% of all agricultural products in Russia, 40% all over the Southern Federal District.

The way of organic production development in Russia, the specifics of certification and the possibilities of state support were discussed by organic farmers, experts of the organic sector, government, and business representatives at the conference “Organic agriculture and biologization of agriculture — the state and prospects”.

Gilles Beschoor Plug, Ambassador of the Kingdom of the Netherlands to the Russian Federation, and Henk Stigter, Agriculture Advisor, met with Dutch companies participating in YugAgro in Krasnodar. Gilles Beschoor Plug noted that the sustainable development of agriculture was an important topic for cooperation with Russia and the Krasnodar Territory. “If we continue to work together, we can serve as an example for other countries,” the ambassador said.

Rostselmash is the general partner of the exhibition.

CLAAS is the strategic sponsor of the exhibition.

ROSAGROTRADE is the general sponsor of the exhibition.

Book a stand
Back